How to Play Casino War 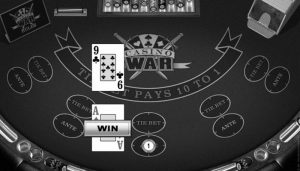 Although slots and video games can be fun, playing card games allows you to get the edge over the house by learning just a basic strategies. If you are looking to take a break from poker or blackjack and want to try something new, then maybe you should consider giving casino war a try. It doesn’t involve nearly as much strategy as a standard casino card game, but it can be more fun if you simply enjoy letting it ride. Besides, going to war against a dealer sounds like a heck of a way to have some fun in a casino.

Casino war is one of the most popular casino card games because of its familiar style of play and ease of understanding. Bringing back memories of childhood card games, casino war is played basically the same way now as it was then. Typically, there are 6 standard 52 card decks that are used and the cards are ranked just as in poker, with aces being high. The dealer presents a card to both the player and himself and then the winner is the person with the higher card.

The odds in casino war are equal for both player and dealer at around 46%; however the odds increase substantially for the house in the event of war, due to the fact that the player must make two wagers to win a single wager.

Overall, war is more of a simple and fun game than a strategy game, as it is basically a game of who has the higher card. A player could both win and lose vast sums of money simply by luck against the dealer. However, even if you don’t place serious wagers in war, you can still have a lot of fun.

If you are more into something that allows strategy to pay off for you, such as poker or blackjack, this game of pure luck is not for you. If want to sit, have fun and harp on back to your childhood, then a little “I Declare War!” will be just what you need.